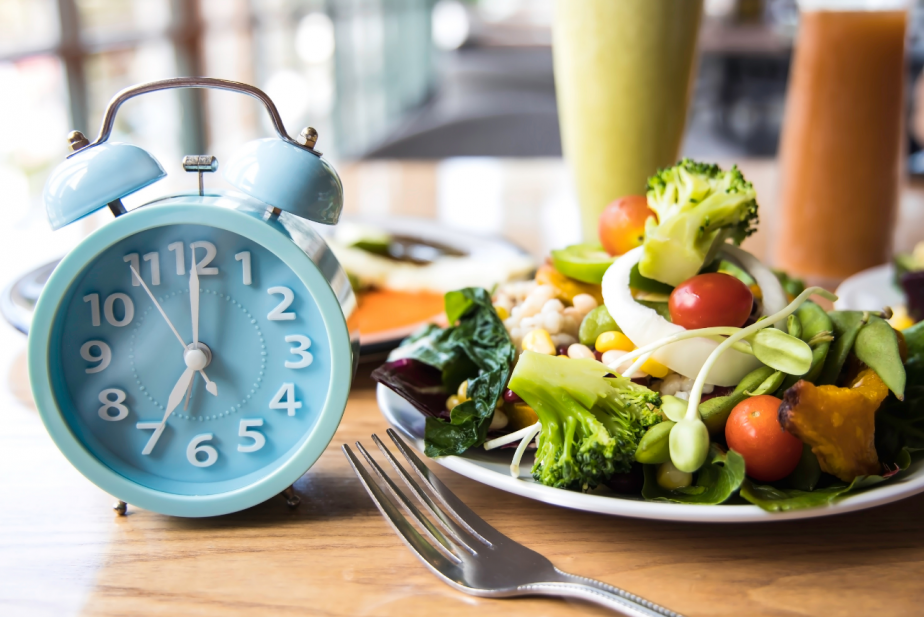 An increasingly common trend in current diet advice is the promotion of a fasting-mimicking diet or, as it is better known, Intermittent Fasting (IF). Many claims have been made about this as a dietary choice. These claims range from fat loss and increased energy, all the way to combating cancer and diabetes while increasing longevity. If these prove to be true, Intermittent Fasting is potentially a powerful dietary intervention and should be considered.

The first task is to define what an Intermittent Fasting diet is. There are three common variants that are generally implemented: The first one is Periodic Fasting (PF) . This is where the dieter engages in a long fast anywhere from two to twenty-one days.  A second type is a Fasting Mimicking Diet (FMD). In this Intermittent Fasting, there is a significant calorie reduction in order to mimic a fast (e.g., 5 day at 800-900 calories as marketed by Dr. Valter Longo). The third is Time-Restricted Feeding (TRF) and is commonly known as a feeding window. This is where eating is restricted to a set time period during the day. Each of these is considered Intermittent Fasting even though their implementation may vastly differ and each need to be considered when implementing an Intermittent Fasting. To draw an analogy, both Crossfit and Les Mills Bodypump are resistance training, but that is about all they have in common. Intermittent Fasting is a category, not a specific diet and shouldn’t be treated as such.

Although the above three approaches are quite different, the basic method of their effectiveness is the same: calorie restriction. A central principle of any working diet is caloric reduction. Above all else, the main mechanism of an effective Intermittent Fasting is energy balance; you are eating less than you are burning. It is important to recognize that this is an implied idea. You can either eat less or burn more. For example, in one study on Time-Restricted Feeding conducted by Dr. Satchin Panda’s lab at the Salk Institute, they fed two groups of mice an identical diet except that one group had a specific feeding window (9 hours) and one did not. Even though the same number of calories of the exact same food was consumed, the group of mice that had a 9-hour feeding window had less fat and more lean body mass on average. The proposed mechanism of a restricted feeding time allowed the metabolism of the mice to be more efficient with regards to their biological clock. On the other side of the coin, the weight loss benefits of Periodic Fasting and Fasting Mimicking Diet are almost certainly due to the restriction of calories with metabolic adaptations being a minimal contributor. The important takeaway here is that Intermittent Fasting is not magic. It works like any other diet.

Although body composition goals are important, there are other potential benefits to implementing Intermittent Fasting. It is important to note that a large majority of health benefits from any diet are simply due to fat loss. It is a fact of life (as well as a scientific observation) that thin people are healthier than overweight people when all other factors are considered. However, Intermittent Fasting seems to confer several benefits that are not achievable by weight loss alone. Among the Intermittent Fasting modalities listed above, Fasting Mimicking Diet and Periodic Fasting have the most promise as a therapeutic intervention from a scientific standpoint. In the case of autoimmune diseases, when you start a fast (or Fasting Mimicking Diet period), many immune cells begin to die, but, once you refeed, this population of cells is quickly restored and are less autoreactive (i.e., they are unlikely to attack your own cells and cause an autoimmune reaction). So, Fasting Mimicking Diet functions much like a brush fire in the prairie: it kills off the old plants so that more vibrant ones can grow and flourish.

In addition to regenerating and re-sensitizing the immune system, there is much promise for Fasting Mimicking Diet in cancer. Fasting Mimicking Diet is thought to help combat cancer via several mechanisms. The first is regenerating the immune system. One of the hallmarks of cancer is its ability to evade the immune system. The second is through restriction of certain amino acids for the cancer to feed on. In a recent study, scientists starved chemotherapy resistant lung cancer cells. They found that due to a deficiency in the amino acid glutamine the cells could not reproduce properly and starved to death. The final proposed mechanism is by starving the cancer cells of glucose (aka sugar). It is an observation that most cancers feed on glucose (known as the Warburg Effect). By restricting the supply of glucose, you can starve out cancer cells while your normal cells feast on ketones obtained by your body burning fat as fuel. Indeed, a recent clinical trial suggests that Fasting Mimicking Diet may be a useful addition to prostate cancer treatment. It is important to note at this point that no diet is a substitute for traditional cancer treatments and that it is important to consult with your oncologist prior to any intervention. Even the biggest proponents of Fasting Mimicking Diet and Periodic Fasting such as Dr. Valter Longo advise it as an addition to current treatments rather than a substitution.

The final consideration for any Intermittent Fasting protocol is, like much of dietary science, the connection between diet and athletic performance is still uncertain. Many of the studies on Intermittent Fasting use either clinically obese or average American (also, often obese) populations. This means that these studies may not apply well to athletes/clients who have a performance emphasis in their training. For example, one of the known effects of fasting (and calorie restriction) is a reduction in IGF-1 (a common growth factor). While reduced IGF-1 may be good for reducing the risk of cancer (as growth factors will only make cancers grow faster) and longevity in general, it is bad for athletes hoping to gain muscle or optimize recovery as it can contribute to muscle hypertrophy as well as joint remodeling. Another concern is that it reduces circulating amino acids. While the body can store both carbohydrates and fats, it cannot store protein. Protein is either used in cellular synthesis (including muscle synthesis) or excreted via urine. This may be a concern to strength athletes in particular where a more consistent source of amino acids may be beneficial to performance.

In summary, Intermittent Fasting is a promising recent development in dietary science. As with any new trend, there is a lot of hype surrounding it. Some of it is justified while some of it is ridiculous. Such is life in the world of fad diets and easy fixes. What is true is that it is a potentially useful paradigm for weight loss and disease management when used appropriately.